A Little Princess the Musical

A musical adaptation of the classic novel

A Little Princess The Muscial

A Little Princess is an orignal musical adaptation of the Francis Hodgson Burnett novel. We are licensing the rights to A Little Princess to theaters who would like to produce the show. Princess Musicals was formed by Michael Hjort and Camille Curtis to write, compose and produce musical theater productions.

Their first collaboration is based on the Francis Hodgson Burnett classic story "A Little Princess". The Premier showing of "A Little Princess" was in the winter of 2000. The show was tremendous success, it smashed all box office records in the 500 seat theater's 20 year history.

Author Michael Hjort and composer Camille N. Curtis based A Little Princess on the Frances Hodgson Burnett classic children's novel of the same name. It is the story of a little rich girl, Sara Crewe, and her struggle to survive in a London boarding school during World War II.

The show opens with a rousing production number, 'Of The Populace', where we meet London street mongers Pearl and Alf, seminary owner Miss Minchin, our title heroine Sara Crewe and her widowed father Sir Ralph. The song ends with the announcement of the outbreak of World War II.

Sara's father, a captain in the Royal Air Force, must leave her at Miss Minchin's seminary. In a touching scene, Sara and her father say good-bye to each other, and sing 'All Girls are Princesses'.

Sara makes new friends quickly and becomes a favorite of Miss Minchin and her other teachers: Miss Minchin's younger sister, Amelia, and French teacher, Pierre Dufarge. She becomes a role model to the oppressed servant girl, Becky, shy Ermengarde, and motherless Lottie, who is comforted by Sara singing the beautiful song 'That's What Angels Do'.

One night, Amelia leads a reading session, and decides to spice it up with an energetic song about a legendary fighter pilot from World War I in 'Boogie Woogie Fly Boy'. The scene ends with Miss Minchin receiving the news that she is facing bankruptcy.

When word is received that Captain Crewe has been killed in action, Sara's world collapses. Miss Minchin conspires with her greedy lawyer Mr. Barrow to steal Sara's inheritance from her in 'What Are We To Do?'. Sara is stripped of her possessions and forced to live in the seminary's attic with Becky. At the end of Act I, we find a grief-stricken Sara in the attic, struggling to believe that she, like all girls, is still a princess. She leads the entire cast in a haunting song about love and loss,'If I Could (Just One More Time)'.

In the opening of Act II, we learn that Captain Crewe is alive in France, but suffering from amnesia. He is rescued by three French resistance fighters who decide to take him to London where they have a comrade in hiding. This comrade is the seminary's French teacher, Pierre Dufarge.

Meanwhile, Sara begins work in the seminary's kitchen. There, the seminary's Cook introduces Sara to her profession with the energetic production number Pies with the chorus in the marketplace. Sara's life becomes quite bleak, but she still has the love and support of her "fellow princesses,". The manservant from India, Ram Dass, keeps Sara's hope alive with the mystical song Hidden Souls. The next morning Sara and Becky awake to find the dreary attic transformed by what Sara believes is 'The Magic'. 'The Magic' must be real, for that very day Sara is reunited with Captain Crewe.

"A Little Princess" has many colorful characters for both adults and children. For children, besides Sara, there are Becky, Lottie, Ermengarde, and several other students including the spoiled and hateful Lavinia. There is also a little boy of the war torn London streets, Eddie.

Songs listed above are orchestrated for piano, flute, violin, viola, cello, bass, and drums. Performances may be accompanied by a piano or a small pit orchestra.

Camille Curtis and Michael Hjort were first introduced at a 1997 alumni musical variety show, by their high school music teacher. 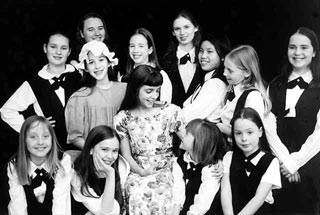 Michael had been working on an original script for A Little Princess and needed a collaborator to write the music. He impulsively asked Camille if she composed music and she agreed to look at his script and lyrics. The first set of lyrics Michael gave to Camille was the song 'All Girls are Princesses'. Within a week Camille finished this song and Michael thought that she had perfectly captured the mood of the song with her beautiful melody.

The script and the songs were written and re-written. Entire songs were completed and then scrapped. In just over two years after Michael and Camille's first meeting, 'A Little Princess' had its world premier at a 500-seat theater and the show was a smash hit. Critics raved about it and the local newspaper editorialized about what an honor it was to have this show premier in its hometown. But more importantly, the audiences reacted enthusiastically performance after performance, showering the actors with thunderous applause, cheers, and standing ovations at the end of each show.